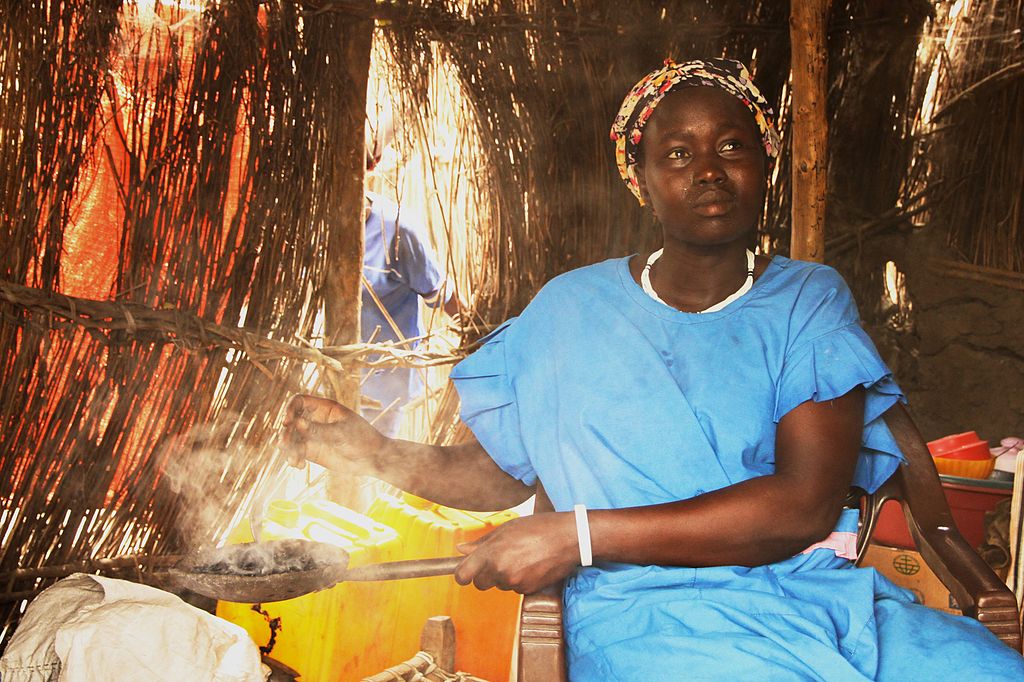 The youngest country in the world was the 51st African country to confirm a COVID-19 case on April 5, 202l. As the world adjusted to the “new normal,” South Sudanese hoped that this pandemic would pass them by. Having experienced floods, a locust invasion and a fragile peace, the expression thiele riek mi mat ro jo riek mi dong [another problem should not be added on top of another problem] held much resonance for South Sudanese.

From speeches to news headlines to casual conversation, the war metaphors we use to describe COVID-19 have become ubiquitous. But what does the deadly pandemic mean in a country that is barely getting out of a literal war? And how do these battlegrounds intersect with the quiet war that South Sudanese women and girls have endured in war and in (relative) peace?

After Six Years of War and …

South Sudan is recovering from a conflict that killed an estimated 400, 000 people and displaced about 4 million citizens out of a population of roughly 12 million. After six years of war, one failed peace agreement and two extensions of the most recent agreement, naming things after second chances is the norm in South Sudan. The 2018 peace agreement is called the Revitalized Agreement on the Resolution of the Conflict in South Sudan. The government sworn in this past February is the Revitalized Transitional Government of National Unity, and the body established to monitor the peace agreement is aptly called the Reconstituted Joint Monitoring and Evaluation Commission (or RJMEC).

The formation of the transitional government three months ago was a significant milestone that gave the country’s leadership a chance to build on a ceasefire that has held for over one year. However, the new government was formed in the wake of several unfinished tasks – the most significant being the unification of what would be Africa’s second largest military.

At present, South Sudan has multiple commanders in chief (because the rebel armies have not yet been unified), five vice presidents and over 30 cabinet ministers. Beyond the capital, the presence of not enough government is having devastating consequences.

While the parties in Juba are at a stalemate over the allocation of the 10 states, intercommunal clashes have become rampant in the regions of Bhar-el-Gazal, Equatoria and Upper Nile, as well as in the newly created administrative areas of greater Pibor and Ruweng. These conflicts are motivated by historical tensions over access to water and grazing land for cattle.

The presence of arms and weapons has meant that conflicts have taken on a militarized character. In some areas, they are proxy wars instigated by political leaders mobilizing armed youths to exploit existing tensions. Between May 16 and 17, 2020, attacks on 28 villages in Jonglei left up to 242 dead, some 8,000 displaced, and more than 200 women and children were abducted.

But Violence Continues for Women and Girls

Not only are women more likely to be victims of intercommunal violence but issues closely related to women are among the prominent drivers of intercommunal clashes in South Sudan today. These include cattle raiding to pay for high dowries, land disputes around inheritance laws that prohibit the passage of land to women and tensions surrounding marriage. Conflict-related sexual violence (CRSV) has been a pervasive feature of the conflict in South Sudan. Yet, this violence has persisted beyond the signing of the peace agreement.

COVID-19 has made so many aspects of our daily lives precarious and unstable. Add to this the long chain of social norms, power relations and poverty that already confine the lives of South Sudanese women. As in the rest of the continent, women make up the bulk of informal workers and daily wage earners. Concurrently, women perform most of the unpaid care work in their homes and communities. The pandemic will not only lead to women’s loss of income, and the autonomy that this brings, but also lead to further domestification as women fall back to socially designated chores and roles. The “shadow pandemic” of COVID-19 has been the rise in domestic and intimate partner violence, as women and children are confined to their homes with violent partners.

Even before the arrival of the COVID-19 pandemic, sexual and gender-based violence (SGBV) was a regular occurrence in South Sudan. Both conflict-related SGBV and intimate partner SGBV. While the data during this period of COVID-19 is not yet available, 65% of South Sudanese women surveyed in 2017 said they had experienced sexual or physical violence in their lifetime.

In May, an 8-year-old girl was gang-raped. Her unconscious body was dumped outside her home in Juba. Women’s groups and activists organized via Whatsapp in 24 hours and marched to the Ministry of Gender demanding answers and action. Activists were disappointed by what they felt were platitudes, the formation of an SGBV court, a promise that has been echoed for a year to no avail. For now, though, the tower of militarism remains deafeningly loud.

As problems pile up one upon the other, they may begin to be unloaded through the formation of state and local governments. This would be a promising start in getting a handle over, and policing, intercommunal violence. It would also alleviate gnawing anxieties around the peace agreement.

Addressing SGBV – in all settings – will require ensuring criminal accountability for perpetrators, comprehensive care for survivors and witnesses of SGBV and addressing rape culture. Finally, while the advocacy around SGBV has fallen squarely on the shoulders of women’s rights organizations and women activists so far, excluding men and boys from these efforts leaves the labor in addressing violence on women’s shoulders.

Nothando Maphalala is a conflict resolution and advocacy specialist based in Juba and Addis Ababa.

Caption:  This woman fled fighting in Malakal, South Sudan, and came to Lankien, where she now makes a living selling coffee.

I Will Not Dance to Your Beat (Stop Ecocide)