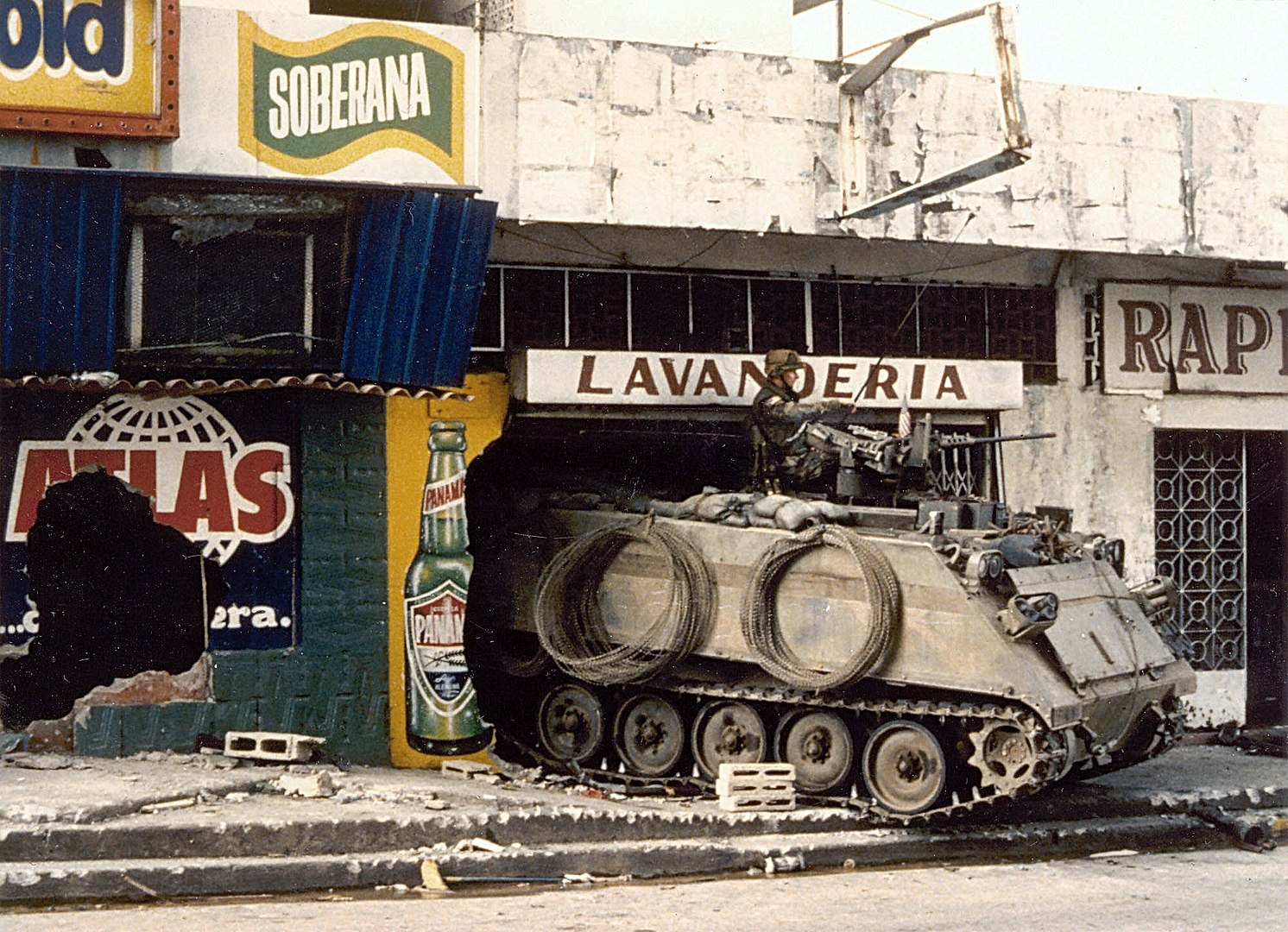 December 20th marks the 30th anniversary of the U.S. invasion of Panama. Dubbed “Operation Just Cause,” the stated aim of the invasion was to unseat and capture Panamanian dictator Manuel Noriega. Noriega, a longtime operative for the U.S. Central Intelligence Agency, had become an embarrassment for the United States government in what was a moment of transition into a post-Cold War world. President George H.W. Bush decided to take steps.

The U.S. invasion involved the deployment of approximately 27,000 U.S. troops. A proto-type version of what would come to be known as “shock and awe” preceded the invasion with explosions lighting up the skies and shaking the ground. The Panamanian military was no match for the invading U.S. troops. For reasons that have never been satisfactorily explained, civilian casualties in this invasion were estimated to have ranged from several hundred to several thousand. An entire neighborhood – El Chorrillo – known for its support of Noriega was destroyed. Thousands of people were left homeless by the invasion.

President Bush justified the invasion largely based on Noriega having been a drug trafficker and dictator. The irony, of course, is that the United States had been well-aware of Noriega’s nefarious activities for years and had, nevertheless, supported Noriega despite domestic opposition in Panama to his rule. The irony was further deepened by the fact that there were no forces in Panama calling for a U.S. intervention.

In 2018 the Inter-American Commission on Human Rights called for reparations to be offered to 315 people directly affected by the U.S. invasion. At the time of the report, the U.S. response was to dismiss this call in light of the U.S. government’s portrayal of the invasion as a legitimate action.

The invasion of Panama was both a continuation of U.S. foreign policy as well as an evolution of that same policy. Latin America has, at least since the Monroe Doctrine of the 1820s, been considered by the U.S. elite to be within its sphere of influence. This has meant repeated interventions, including but not limited to direct invasions, occupations, support of military coups and assassinations. In fact, the creation of Panama was orchestrated by the U.S. government when Colombia – which at the time had jurisdiction over the land that would become Panama – refused U.S. pressure regarding the creation of a canal from the Caribbean to the Pacific.

What was new, however, was the context. The Cold War was winding down and, once again, the U.S. elite was in search of “enemies.” In order to affirm its role, the U.S. government apparently felt the need to display the extent of the high-tech deadly force that it could inflict on an opponent.

Within a matter of months of the Panama invasion, the United States would replicate a similar pattern, this time with Iraq. The regime of Saddam Hussein that had been supported by the United States in its repression of internal dissent and its war of aggression against Iran, found itself in conflict with the Kuwaiti royal family over oil and financial loans. Turning to the United States, Hussein explained his case and was informed by the U.S. ambassador that this was not an affair involving the United States. Hussein, understandably, took this as a green light and proceeded to invade Kuwait in order to settle his differences.

You know what happened next. So much for being an ally of the United States.

It is easy to forget Panama because so few U.S. soldiers were killed in the conflict and most people in the United States seem to be numb to the deaths of others unless it has a direct impact on our lives. In the case of Panama, however, it turned out that the invasion had a significant impact. It set the stage for the Gulf War. But it also had an impact, because the viciousness of the U.S. invasion was seared into the memory of the Panamanian people. That will be difficult to remove.

Bill Fletcher, Jr. is the executive editor of globalafricanworker.com and former president of TransAfrica Forum.

Photo caption: A U.S. tank destroys the Panamanian Defense Force headquarters building during the second day of the 1989 U.S. invasion of Panama.

When the Python Sings