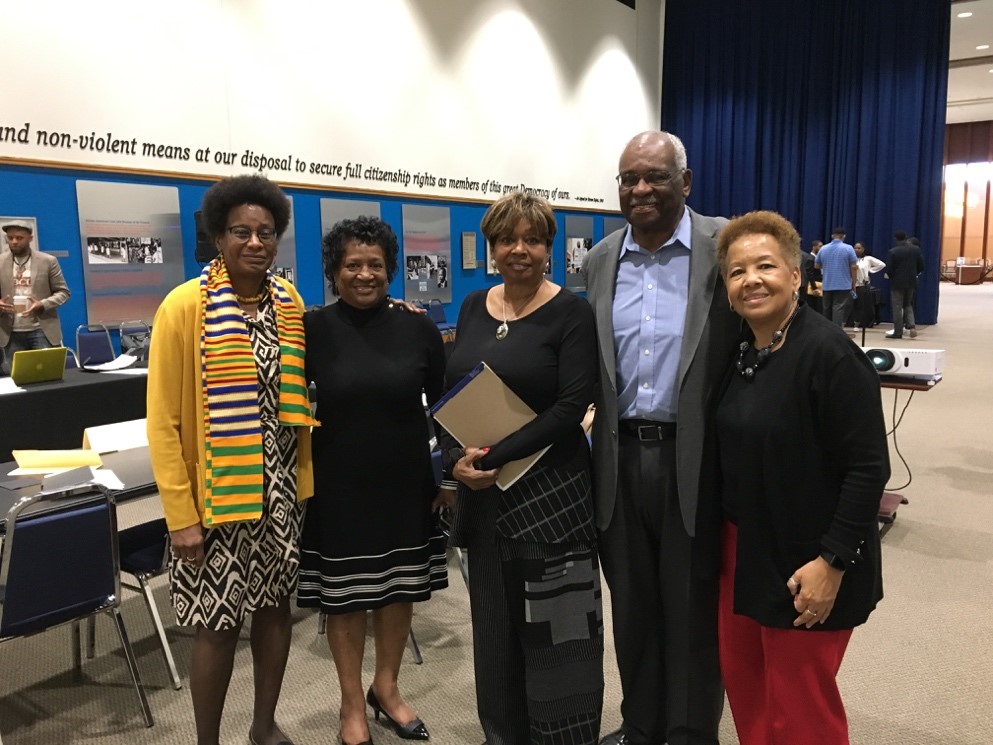 Historically Black Colleges and Universities Team Up with Africana Unionists for the U.N. Decade for People of African Descent to Address Digital African-Africana Education for All

On March 19, 2019, faculty, staff, and students from six HBCUs, Black unionists represented by the A. Philip Randolph Institute and UNITE, and the HBCU Green Fund, met at the Atlanta University Center to prepare to work in tandem with Queen Mothers and other traditional area leadership in Africa, and communities abroad, to make Africana education-for-all a reality. It was the founding meeting of the African-Africana Digital Education & Work Collective (AADEW), convened by the Morehouse College International Comparative Labor Studies program (ICLS). Dr. Doudou Diene, a leader in the United Nations Educational, Scientific, and Cultural Organization (UNESCO) Slave Routes Project and struggles against racism and discrimination, encouraged HBCUs to come together to contribute to the activities in recognition of the U.N. Declaration of the Decade for People of African Descent, 2015-2025.

The AADEW collective will support archival research to retell the narrative of Africana people and provide new insights for on-line and blended education. The AADEW archival studies agenda will focus on the contributions of working people of African descent. Digital books and curriculum will be published for “integrated” learning and earning, for both students and teachers, to address resource shortages. In discussions at the Universities Studying Slavery Conference at Virginia Commonwealth University, Dr. Howard Dodson drew attention to the accomplishments in digital on-line narration of findings from archival studies made by the Schomburg Center for Research in Black Culture during his tenure as Director and offered his support. The AADEW goal is to take off from the work that Africana scholars are doing, and to organize education delivery solutions to provide access for all to Africana education by exploring new economic models for a sustainable relationship between work and learning.

The meeting began with a presentation on criteria for a Pan-African education approach that includes sustainability and both science and humanities/social science disciplines. For more information, see

Participants described their research exploring all areas of the Americas where artifacts of names and work tools help piece together the cultural evolution of people of African descent. This work will be enhanced through direct collaboration with African archives, beginning with those of the University of Ghana, and archival studies training, beginning with the Atlanta University Center Woodruff Library. An AADEW archival studies agenda was set to focus on understanding how working people of African descent developed cultures of learning, passing on skills and knowledge before, as well as after formal schools were created.

Participants grappled with how the future of black workers in the Diaspora is linked to the future of workers in Africa, in the best tradition of Marcus Garvey, W.E.B. DuBois, George Padmore and Kwame Nkrumah. Each of these leaders foretold that Black people must work together in global solidarity for Africa’s renaissance in order for people of African descent everywhere to achieve the strength to back-up their self-determination. Important to this unity is an education that provides a foundation of knowledge plus communication skills for life-long learning, and an awareness of the contributions of people of African heritage to humanity to support positive self-identity and defeat the depressive effects of constant racist degradation.  According to Kwame Nkrumah, when caught in the grips of a negative social bind, only increasing positive action can overcome negative action.

Unbelievably, in many communities in Africa today, less than 20 percent of youths have the opportunity to attend high school. And in many communities in the United States, barely 50 percent of youths complete high school. In fall 2018, the government of Ghana, faced with having less than fifty percent of the facilities and staff needed to enroll all the students who wished to continue into high school, made the hotly debated decision to divide the school semester into two. High schools enroll one group of students for the first half and a different group for the second half of each semester. This doubles the number of students served but holds all hostage to losing half a term due to the scarcity of government allocated resources. With structural adjustment and free-market interventions, increasing shares of taxes and public wealth were directed toward unsustainable debt repayment and private profits for foreign corporations allowed to own Africa’s resources. This promoted dependency on foreign capitalist interests – interests that do not include education-for-all.

Meanwhile, Africana youths demonstrate creative genius despite the lack of support. They improvise crafting automobile parts, repurpose computer hardware, have cutting-edge ecological sensibilities, and lead the world in music and fashion cultural production. In this tug-of-war between the realities in villages, towns and ghettos across Africa and in the Diaspora, and the elite serving dependency, where can a self-reliant breakthrough for education rest?

Professor Cynthia Hewitt, ICLS Chairperson, explained the importance that historic governing structures of queen mother and chiefs of traditional lands in Africa could have to redefining education. In particular, queen mothers have historic unbroken authority and integrity respected by their people. The independence that was won in Africa was modeled on Eurocentric models and culture which historically was patriarchal, and thus the queen mothers were left behind in the village. Throughout Africa, even where queen mothers are no longer seen today, their memory forms a root stock of historic African self-governance that included both women and men. In Ghana, where the collective will begin, active queen mothers have recognized authority that offers an alternative base for educational development. Today, queen mothers are on the frontline in the struggle for education, just as so many mothers are in the grassroots communities of African descent in the U.S. and Diaspora.

The Queen Mothers of the African Spiritual Healing Center in Ghana are organizing a Welcome Home for summer 2020, for the AAEDW collective and their families and friends. By pairing villages with HBCUs and Unionists, they can begin to forge on-going working relationships to make transformative internet-based Africana digital education possible. HBCUs, as representative of over 400 years of successfully meeting the challenge to educate ourselves – particularly as we emerged from the devastation of slavery – should have a unique role to play in the rapid solving of education for all in Africa and the Diaspora.

The AADEW organizers recognize that an Africana education-for-all has to have solid legs on the ground along with visions in the clouds. Solutions to resource limitations, including alternative economics, must also be explored. “The working lives of teachers must also be changed for the better,” said Dr. Hewitt. “Many suffer from inadequate salaries and many times they are not paid, for weeks or months, and some schools have scandalously poor working conditions.” She suggested that in the absence of a huge spurt in resources available, perhaps one direction may be reorganizing to support their teaching for only part of their day, while they return to productive work in various careers for the other part, to increase their earnings and allow them to keep up-to-date skills.

Similarly, such an “integrated” learning and earning approach should include student apprenticeship and real production for use or sale, i.e., self-sufficiency and/or monetizing approaches, in sustainable local innovative facilities. “The era of young people sitting down for twelve or sixteen years and having education poured into them, the mass production of education, is over like Fordism is over,” Hewitt argued. “Now flex production is spawning flexible education. We need to get out ahead of the curve on this.” Working people are faced with the challenge to adapt to life-long learning, to gaining and maintaining the knowledge to make artificial intelligence and robotics work for them instead of against them. There is also a need to rethink the benefits of constant change and newness over conservation and tradition. “Education-for-all requires the community of working adults to set the expectations and contribute their expertise and resources to its success,” concluded Hewitt.

The union representatives listened closely at this founding meeting. Then they said that they were on-board. They invited the collective to hold a Town Forum at the upcoming A. Philip Randolph Institute Educational Conference in August. And they issued one challenge: everything they had heard was interesting, fascinating and important and needed to be brought before their members, but there is a need for it all to be expressed in words of common knowledge, and not esoteric jargon, so that everyone can understand. This goes beyond the event to the heart of education for all. Attention was also called to the famous declaration of A. Philip Randolph, “At the banquet table of nature there are no reserved seats, you get what you can take and you keep what you can hold…and you can’t get anything without organizing.”

Similarly, the student representatives from Morehouse, North Carolina A&T, and Spelman, who participated, took notes, and helped organized the event, raised their voices for reconciling expertise and inclusive communication. They also pushed for realization of inclusion of K-12 education scholars, an ideal shared yet not realized thus far by the organizers.

“Today it is clear that peoples of African descent, on the Continent and throughout the Diaspora, would benefit enormously by organizing with the shared goal of obtaining a just return and benefit from our labor,” stated Felicia Davis, President of the HBCU Green Fund, “a Pan-African mindset is essential and the HBCU AADEW provides a platform for shared research, education and collective action in the interest of black workers globally.”

An AADEW Concept Paper states in part, “This decade will not be like the last one – when the people were totally the victim of ruling parties and international actors’ decisions to underfund education. All the conditions for the sharing of knowledge, re-affirmation of self-identity, and utilization of innovative learning platforms are now in the making. The spread of environmental sustainability education reflects growing community commitment to taking on the challenge of local production, green energy, and people-to-people communication as being best for the health and peace of all. This includes the possibility now for electricity everywhere through stand-alone solar; digital imaging that brings the excitement of live performance and film/video to any size screen; supplies that can arrive via drones; and the results of the home-schooling revolution that tell us students and families are practicing flexible self-determination in learning, and this can and must be available everywhere.” The National Domestic Workers Association poignantly declares “We Dream in Black.” The organizers of AAEDW argue that a black vision, a Wakanda future for all, begins with a rededication to a quality Africana education for all.

The AADEW will hold its next meeting of the collective in September 2019. Representation is welcomed by all HBCUs, all Africana scholars and unionists, and all those who would contribute resources and skills to the cause of transformative radical inclusion through Africana digital education-for-all. For more information contact: cynthia.hewitt@morehouse.edu.